University of the Third Age

This rather different heading is the kind of cryptic clue that appeals to the members of U3A Healesville Cryptic Crossword group. In case you’re wondering, the answer is ‘mad dogs (3, 4)’ as in, ‘mad dogs (rabid) and Englishmen go out in the midday sun (noon)’. 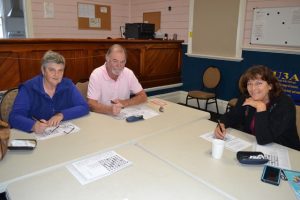 Cryptic crossword clues can be formed in a number of ways. Anagrams are often used – for example, ‘Learn fool, a slogan for Aramis’. The answer is found by forming ‘one for all’ which uses the letters from ‘Learn fool’ + Aramis who was one of the Three Musketeers. Another tool is double meanings – a bit like the ‘mad dogs’ clue, or a combination of meanings such as ‘seaman has a road to another country’, where the answer is ‘abroad’ – ab is being used as a short term for a seaman.

Joan Barlow joined the cryptic crossword group early in 2021. She always liked doing crosswords but wanted to challenge herself more – so why not try cryptics?

‘At first it was pretty difficult to work out the answers, but it got easier,’ Joan said. ‘It helps to be part of a group. If I get stuck on some of the clues, others in the group will help and also explain how they worked out their answers. One of the best things is the challenge of using a different kind of thinking, of solving puzzles,’ Joan said. ‘And it’s fun. Plus, I’ve met new people through cryptics, people who have not been in other U3A courses that I’ve done.’

Find us at the old Court House, 42 Harker St, on the corner of Healesville-Kinglake Rd, Healesville.

Your first Arvo Tea for 2022 will be held on Wednesday October 5  in the Senior Citizens’ Hall. Final timings to be confirmed.

Current members may enrol in classes: